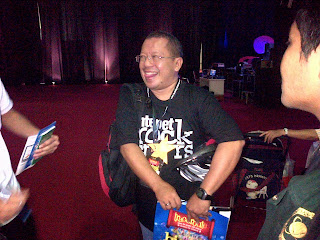 Telematics expert Onno W. Purbo assess Indonesia's telecommunications regulator has violated human rights when it banned the application of open BTS in Indonesia. "Poor people are not affordable BTS village operator can not enjoy communication. Regulators should have thought of it , and a statement that the regulator does not allow open BTS heard around the world know , a lot of responses from overseas coming into my email , " said Onno to merdeka.com. Onno also denied that he asked for the allocation of the 900 MHz to open BTS . However , if requested at 900 MHz , it should not be a problem , because the stay was arranged how to keep the villages that get permits allocation of the 900 MHz band . Ridwan Effendi statement that says that worldwide 900 MHz band can not be used to open BTS also need to have been verified . " The word around the world it's really awesome ! Then speak the truth should be checked first , " Onno said. Members of the Indonesian Telecommunications Regulatory Body , M Ridwan Effendi confirmed that the frequency of 900/1800 MHz unlicensed frequency alias is not the unlicensed bands where their use must be authorized by the Minister . So it can not be used to open the BTS . It's not just in Indonesia , but also around the world . It should be noted , indiscriminate use of frequencies may cause interference that can disrupt the performance of telecommunications networks , said Ridwan . According to him , in the Law No. 36/1999 on Telecommunications , holding open semodel BTS can only be possible through the provision of telecommunications services in cooperation with network operators ( carriers ) . Any telecommunication operation also required to have an operating license . This is a real obligation to the protection of the public will also legal certainty and assurance of quality service standards , he said .
Diposkan oleh Arif Pitoyo Today di 6:31 PM

Do you need a hacker? Do you need to keep an eye on your spouse by gaining access to their emails? As a parent,if you want to know what your kids do on a daily basis

Bank Jobs, Flipping cash, Criminal records, DMV, Taxes, Name it,he will get the job done.He’s a professional hacker with 20 Years+ experience.Email him on

elijahlucaswizard@gmail.com for him to get your work done ... Tell him Richard referred you okay.

Arif Pitoyo Today
Jakarta, Indonesia
i am only an ordinary people...